Thinking about my review of The Reader on the 6.27 by Jean-Paul Didierlaurent, the phrase that continuously sprang to mind was ‘very French’.  The blurb on the back cover (which I always avoid until after I’ve read a book) compares it to the film Amélie, which was precisely the comparison that kept coming to me. The Reader is similarly warm and quirky, with a slight fairytale quality despite its contemporary setting.

Guylain Vignolles has an empty life, with a job he detests and only his goldfish, Rouget de Lisle, to come home to. He works in a pulping factory where unwanted books are sent to die. Anyone who hates their job will easily identify with this passage about his regular Monday morning dread:

‘The mobile phone set to wake him at 5.30 vibrated on the bedside table. Beneath the water’s undulating surface, Rouget de Lisle’s protruding eyes stared at him from his bowl. Monday. Where had Sunday gone? Got up too late, went to bed too early. A day without. Without desire, without hunger, without thirst, without even a memory. Rouget and he had spent their day going around in circles, the fish in his bowl, and he in his studio flat, already filled with dread at the thought of Monday.’ 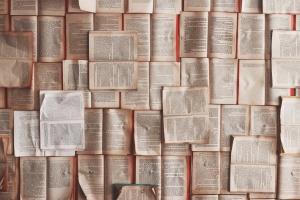 He finds comfort in ritual, counting things on his walk to the station and reading aloud to his fellow passengers on the 6.27am train (to which they seem surprisingly amenable, proving that this isn’t exactly grounded in reality. If you tried that on your morning commute, I think it’s safe to say people would throw shoes at you). What he shares with his avid listeners are the random pages he salvages from beneath the evil pulping machine (a menacing, insatiable monster called The Thing). In reading them out, he’s both paying homage to those fallen soldiers and expressing his own love of words.

Guylain’s world is shaken up when he finds a USB stick on the train one morning. Saved on it is a young woman’s account of her equally soul-destroying job. Julie describes her life as a lavatory attendant in colourful detail, as well as her desire for something better. Guylain becomes smitten with this unknown kindred spirit. Both he and Julie need saving from being chewed up by their lives as much as the pages need rescuing from The Thing.

If I have any criticism of this book, it would be the length. This feels like a novella, or even a very long short story, and the set-up, so leisurely done with an eccentric collection of secondary characters, becomes rushed the further the story progresses, the ending abrupt. I wanted to know much more about lonely Guylain, his friend Giuseppe (who loses his legs in an accident at the plant and involves Guylain in a bizarre plan to get them back, sort of) and feisty Julie.

This is Didierlaurent’s debut novel, while his short stories have twice won the International Hemingway Award. In an interview on the Pan Macmillan site (his publishers), he admits to being much more comfortable in short story territory, and I think this lack of confidence does show somewhat. It’s rare to see an author confess to ‘an inferiority complex’ in writing their novel, and I found that very open and endearing. He also reveals that Guylain’s tale began as a short story, and he decided to take the leap into novel writing because he found it so hard to let go of the characters. Luckily he didn’t, and the result, though brief, is sweet and charming.

#SomeBooksofSummer-ish 6 of 7. Final read – The Glorious Heresies by Lisa McInerney

4 thoughts on “The Reader on the 6.27 by Jean-Paul Didierlaurent reviewed”