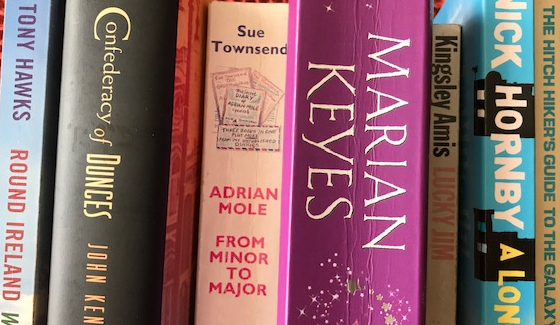 Today’s Irish Times has a feature about humorous, uplifting books to see us through these troubling times. I couldn’t resist the urge to put together my own list of suggestion, if only to dodge the WIP I’m sitting in front of. It isn’t a definitive list, just some things off the top of my head that might lift the spirits?

So here they are. Do please get in touch with me if you have any to recommendations of your own:

Lucky Jim, Kingsley Amis: I read this at university and it still makes me laugh every time I think of one particular scene towards the end where Jim is on a bus, rocking forwards and back trying to physically make it go faster to get to the girl he loves. Genius!

The Hitchhiker’s Guide to the Galaxy, Douglas Adams: I can’t even remember when I read it first, though again it was during those university years, and it was like nothing I’d read before. I’ve reread the series multiple times, and still find the writing perfection every time. The Dirk Gently holistic detective agency books are wonderful as well.

Anything by Marian Keyes: speaks for itself. She is possibly the funniest woman alive, and so astute. Her work is extraordinary in that she can make you howl with laughter on one page, and then punch you in the gut with something pitch dark on the next. But she is so expert at striking that balance. If I had to pick a favourite, it would be This Charming Man.

Similarly, anything by Nick Hornby, in particular Fever Pitch, High Fidelity and A Long Way Down: anyone who can get laughs out of suicide, loneliness and dysfunctional families has to be a masterful writer, and Hornby is. There aren’t many people who could get me to stick with a book about Arsenal.

A Confederacy of Dunces, John Kennedy Toole: actually a pretty dark book about an infuriating sociopath, but magnificently done. The ludicrous, epicly delusional Ignatius T Reilly, who roams the streets of New Orleans expecting to be recognised for the king he is in his own head, is a grotesquely comic character who cannot easily be forgotten.

Round Ireland with a Fridge, Tony Hawks: this book has sadly been largely forgotten, but I read it while I was living in the UK and it made me nostalgic for home. Comedian Tony Hawks set himself the daft challenge of hitchhiking around Ireland with a minifridge, just to see if Irish people would be willing to pick up someone doing something so odd. Of course they did – because the Irish can’t resist an interesting tale. As well as being very witty, this is also part travelogue similar to Bill Bryson and part anthropological study.

McCarthys Bar, Pete McCarthy: another Irish travelogue, this is hugely entertaining for similar reasons to Hawks’s book. The Irish. What a mad and quirky bunch. It’s incredibly warm and builds a lovely picture of different aspects of Irish culture. And McCarthy himself is such an endearing narrator that it’s a pleasure to go along on the journey through the length and breadth of the country, visiting pubs that bear his name, and living off toasted specials and Singapore noodles. The Road to McCarthy is equally enjoyable.

The Secret Diary of Adrian Mole, Aged 13 3/4, Sue Townsend: what can I say about Sue’s books? What a legend, a comedy genius. I actually hated Adrian Mole when I first read it, but it turned out the reason was because I, too, was 13/14 at the time and it was just too close to the bone! An insightful take on the complexities of the teenage years. And I had a particular fondness for OAP Bert and his hound Sabre. But I have to say, possibly controversially, that insufferable teen Adrian was much easier to spend time with than insufferable adult Adrian of the later books.

Starter for Ten/The Understudy, David Nicholls: his work is hilarious, particularly his earlier books. At a push, I would recomend his more recent novel Us for its humour as well, though the subject matters – the break-up of a marriage and a troubled father/son relationship – are undoubtedly melancholy. But he has such a light touch as a writer.

Bridget Jones’s Diary, Helen Fielding: we tend to think automatically of lovely Renee and gorgeous Colin and slimy Hugh because the films are so well known, but again this book was so fresh and refreshingly honest when it was first released. It’s the kind of comedy that bears up to repeated readings (can testify).

The No.1 Ladies’ Detective Agency, Alexander McCall Smith: a wonderful, heartwarming series of books set in Botswana. Mma Precious Ramotswe sets up a detective agency because she is fueled by a desire to help people. It has the witty, gentle tone of All Creatures Great and Small. And there’s an entire series of books for anyone with the stamina to read them all.

Dear Mrs Bird, AJ Pearce: I read this very recently and it’s really delightful. Set in London during the Blitz, it’s about a young woman who goes to work on a magazine and accidentally ends up offering readers agony aunt advice. There are shades of Bridget Jones and The Guernsey Literary & Potato Peel Pie Society (don’t get me started on how much I love that book). My friend Claire and I spent quite a long time discussing our dream casting for a series/film of this one.

7 thoughts on “Laughter in a time of corona”